Words of Inspiration Ministries
The Marriage of Poetry and Music

Robert T. Sells, is best known as The Anointed Poet, he is an award-winning Christian spoken word artist, singer and motivational speaker who began writing poetry at age 11. It wasn’t until he gave his life to Christ in November, 2011, that he began writing for the Lord. Now he is a sought after minister of the Gospel.

Together with his wife, Marlas Sells, they are the co-founders of Words of Inspiration Ministries the marriage of poetry and music. Marlas is also a singer, writer and motivational speaker. They have released Robert’s debut cd entitled "The Heart of a Man" and also self-published two books in the Words of Inspiration poetry series entitled "Words of Inspiration: A Collection of Poems for the One You Love" and "Word of Inspiration: Speak Healing". The third and fourth installments in the series are due to be released in 2014, as well as their first novella “Not Denied” and they are working on material for the second cd project.

Posted by A Scribe of the Lord, a Scribe for the Lord at 10:59 PM No comments:

Special Price of $ 0.99 on After the Affair Emotional Healing God's Way (Book # 1) EBook During April 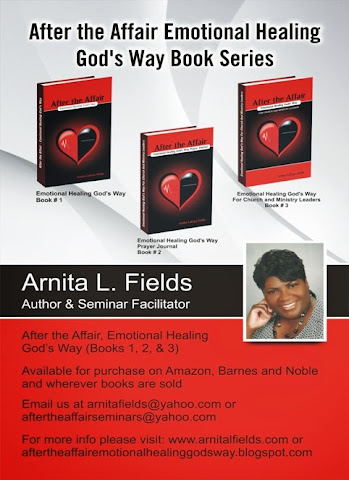 After the Affair Press Release

Listen To Self Help Internet Radio Stations with AuthorTJ on BlogTalkRadio

Listen to internet radio with Divas Literary World on BlogTalkRadio

Listen to internet radio with TheGingerLondonShow on Blog Talk Radio

Make a video of your own at Animoto.

Listen to internet radio with FB3 on BlogTalkRadio